With the latest release of the Process Cloud Service (17.1.3), Oracle has released a preview version of its much awaited Decision Model and Notation (DMN) engine. The DMN standard provides a powerful meta-model, notation and semantics for modeling of operational decision and business rules. It is a critical addition in the process, case and decision modeling framework providing an open standard for modeling the data and logic associated within a process.

The notation standard aims at defining requirements and decision logic for manual and automated decision-making by representing a complete, executable model which can either be used independently or in conjunction with a business process. Similar to BPMN, it aims to support designing of decision models, providing guided operational decision and potentially automation of operational decisions. A combination of process and decision modeling simplifies business processes by eliminating and replacing sections of a process model with a decision model. The decision logic of the process model is captured as a separate yet linked model. By focusing on decisions and processes independently the requirements process is more focused. A decision-driven process acts on the outcome of the evaluation of decision logic in several possible ways, including:

A decision  can be thought of as a meta gateway with merging inputs (events and data) and splitting outputs that direct the process in an overarching way (i.e., participants, tasks, and gateways).

Integrating business process modeling with decision modeling, as well as event processing, can create comprehensive, agile solutions that are easy to change and enhance. Without decision modeling, process modeling in BPMN can both overcomplicate a model with logic and miss critical design details. As decisions are modeled, things will be discovered that the process must do to accommodate the results of those decisions. 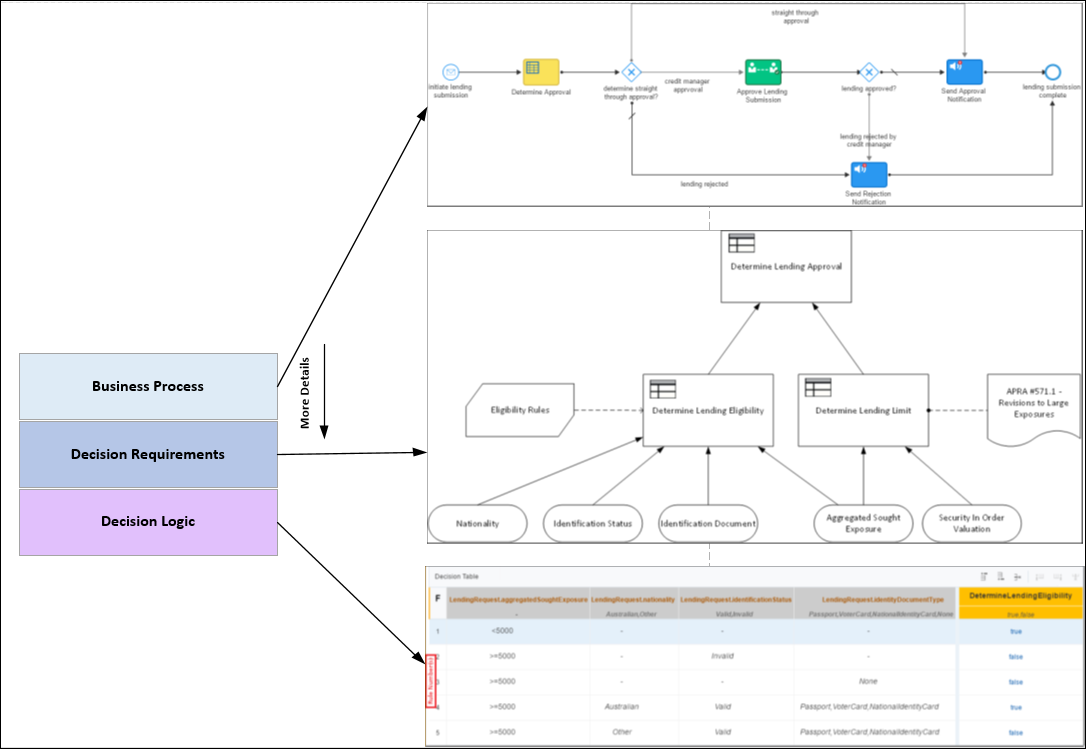 This blog post intends to provide an introduction to the basic concepts of DMN, its constructs, illustration of a real like use case and how to get started with DMN in Oracle Process Cloud Service.

The objective of a decision model is to create a shared understanding about logic, data and process that are fully traceable from business requirements to IT implementations. The Decision Modeling and Notation standard from the Object Management Group (OMG) is a notation that accomplishes these goals. The true value proposition of DMN lies in providing a common language that bridges the gap between across business, IT and analytics department within organisations, thereby improving collaboration, reuse and ability to implement accurate and consistent decision management solutions. The DMN semantics are based on the following principles:

In the context of DMN, a Decision is an act of determining an output value, based on a number of input values, using logic defining how the output is determined from the inputs. A Decision Model is a formal model of an area of decision-making, expressed as decision requirements and decision logic. A decision model is defined in two levels, the Decision Requirements Level and the Decision Logic Level which is explained in a bit of detail here. At the decision requirements level, the notation is simple enough to make the structure of the model immediately apparent; yet, the decision logic level provides a specification of the decision-making which is precise enough to allow full automatic validation and execution.

A lot of the information provided above can be summarized in an easy to visualize mind map that I have created. The mind map shows a relationship between a number of DMN components across both decision requirement diagram, decision logic and decision services.

A Simple Use Case : Loan Straight Through Approval Decisioning

Imagine you are working at a bank in the personal lending fulfilment department. A customer wishes to make a request to determine his lending eligibility for a personal loan. Can you accept his request, determine and outcome and communicate to him the result? You have to make a business decision. What are the criteria for the correct decision and what information is your choice based on. The bank has standard rules and guidelines for handling the request, some of which are:

As stated before a DMN diagram does not depict the decision logic of a particular decision. Decision logic specifies the details of one decision, so that it can be easily and unambiguously understood by a human. In the rest of this blog post, I will provide detailed steps through which the above decision model can be translated into a decision logic executable as a DMN decision model in Oracle PCS and subsequently exposed as a decision service to be consumed by a business process.

If your PCS instance has been updated to 17.1.3, you can enable DMN design and runtime by navigating to Administration > UI Customization > and check Enable DMN in Composer.

Once the DMN editor is available in composer, you should be able to create a new Decision Model in any available project space in PCS. The decision model that I created and which will be covered here is called Lending Approval. A decision model in DMN can have more than one decisions that are based on boxed expressions with each decision taking in an input type and resulting in its own output. A decision model can also be service enabled by defining a decision service and associating one or more decisions to it. The interface of the decision service is determined by the input association and output is determined by the outputs associated with the decisions. The following illustration provides an anatomy of a DMN decision model in Oracle PCS.

Let’s assume that the retail lending application use case being discussed has an overarching process model (will discuss this shortly) that allows lending approvals without any manual approvals for certain scenarios. In order to determine this, a decision model has to evaluate lending eligibility as well as calculate an approximate lending limit that can be approved for the applicant. An applicant’s personal lending request is deemed eligible if:

Finally, the decision logic behind these checks should ensure that all the above conditions are met for the lending request to be deemed eligible. If at least one condition is not met, then the lending request is denied. Once an eligibility has been determined, the decision function then also needs to calculate the maximum lending limit based on the credit information provided by the applicant.

When a decision is created in a decision model, it requires an input and output definition. For our example, I created a complex LendingRequest element with a few simple elements which would be used in the decision table. You can also use an existing business object for an input variable. 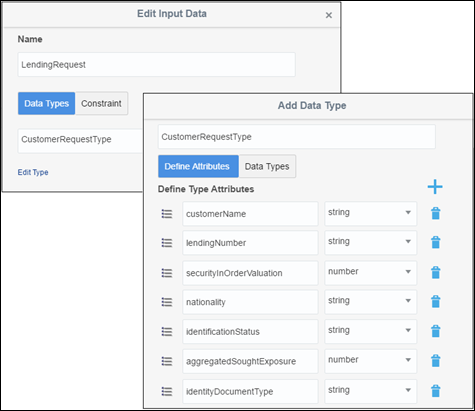 Creating Bucketsets in a Decision in DMN

Input expressions defined in the decision table can be bucketed as list of values or a value range to restrict the condition evaluation to a value within the bucket. This is very useful in long decision tables as it restricts users from entering invalid values that would otherwise result in an exception.

Decision tables in DMN has another very interesting feature called hit policy. A hit policy specifies how many rules of a decision table can be satisfied and which of the satisfied rules are included in the decision table result. The hit policies supported in Oracle PCS are Unique, Any and First and Collect which are described in more details in the table below.

A single decision model can have one to many decision services and likewise one to many decisions. Decisions can be associated with decision services which provides a service interface to invoke a decision logic construct. As originally explained in our use case, we also wanted to calculate the automatically derived lending limit from a business rule. Whilst determining such a limit in real world would be based on very complex rules, a simplified version is shown below. The lending limit is based on the difference between the total valuation of a customer’s security against a sum of his/her outstanding loans. The result of the expression can also be evaluated against a number range to determine the decision output as shown in the decision table below. Note that [ denote that the number in the range is inclusive while ( denotes it is exclusive.

The DMN composer in PCS has very strict design time validations for decision tables and models. Once the rule components are validated, they can be deployed as a standalone application in the same way as a PCS application. Once a DMN application is deployed, it will provide a rest endpoint to post a request and get a response. Here is a sample JSON request to the Rest endpoint and I use in Postman to invoke the service. The output is an decision interpretation object returning the result of each executed decision table in the decision service.

Using the New Decision Activity in a Process Model

The final piece to the puzzle is to use a DMN decision component in the process model. Needless to say there is a new Decision Activity available in the System palette in PCS composer to associate a decision service to the activity. The data association wizard in PCS can then be used to pass and retrieve information from a decision function. The following process model shows how the decision model discussed in this example can be used in an overarching process for straight through approval of customer retail lending. The result from the decision function are used to determine the process flow:

The PCS process and DMN business rule application discussed in this blog can be downloaded from here. When these applications are deployed to the runtime, they can be tested from end to end. The Manage Lending Submission process model has an event start (initiate lending submission) node which means that the process can be invoked as a SOAP endpoint. The section below provides a few test scenarios and how process map behaves based on the output determined by the DMN decision model.

The Decision Model and Notation not only adds clarity to business logic, it sharpens and simplifies business processes. A process model should represent the procedural flow of tasks. A decision model should represent the declarative conditions leading to the conclusions of business decisions. In the past, due to lack of alternatives, this was mixed up in process modeling notations leading to complex and convoluted process models and eventually maintenance headache. Decision models are relatively new to most organizations and the support for the DMN standard has just released in Process Cloud Service. This blog post should hopefully provide you with the necessary knowledge, tool and best practices for implementing decision models in business process and stay ahead of times. to start No one reading this column should feel behind the times. DMN and BPMN are very powerful together and using them wisely together could provide organizations with many advantages such as:

If you have any comments, suggestions or feedback about the post, please feel free to type it here and I will do my best to address them asap Cancel reply

Find in this Blog